With the continuous development of trade globalization and improvement of China economy, imported foods have become an important food source for Chinese consumers. On 20 July 2018, the General Administration of Customs (hereinafter called Customs) issued the quality and safety report of imported food of 2017.

In 2017, a total of 1.429 million batches of imported food were imported into China, the quantity of which reached 53.481 million tons while the amount of money reached 58.28 billion dollars. Compared with the same time last year, they increased by 7.9%, 36.5% and 25.0% respectively. In the past five years, the average annual growth rate of imported food trade was 5.7%. Detailed information is shown in Fig.1.

In 2017, China imported food from 187 countries (regions), among them, the top 10 countries (regions) in trade amount were European Union, America, New Zealand, Indonesia, Canada, Australia, Brazil, Malaysia, Russia and Vietnam, with a total value of 44.03 billion dollars, which accounted for 75.5% of total imported food trade value. Detailed information is shown in Fig.2.

In 2017, the imported amount of milk powder (including whey powder) was 1.324 million tons, which accounted for 22.7% of domestic dairy products supply. The imported trade amount of infant formula milk powder is increasing rapidly, and its imported amount reached 291 thousand tons, up 31.7% from the last year. More detailed information is shown in Fig. 5 and 6. 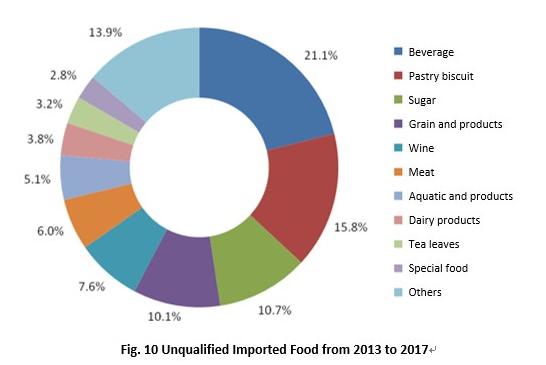 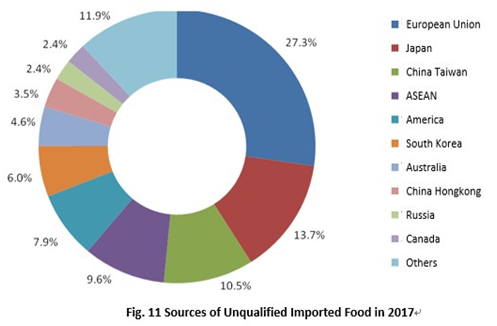 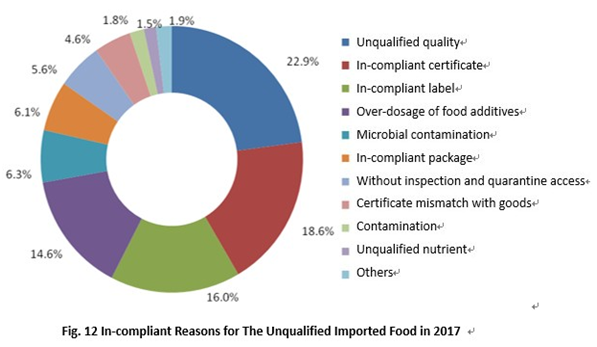 Adequate preparation before importing can effectively help enterprises reduce the in-compliant risks when importing. For example, it can guarantee product quality compliance by conducting pre-test according to requirements of Chinese regulations; it can avoid importing food with over-dosage food additives by conducing compliance analysis of product formulations in advance; it can guarantee label compliance by designing compliant Chinese label and deleting risk claims according to Chinese food labeling regulations.

In order to guarantee the safety of imported food, the Customs has established strict supervision system covered all steps of “before import, during import, after import”. Therefore, CIRS advises enterprises to pay attention to the imported food regulations in China, and make sure the quality, labels and package of your products can meet relevant requirements.

If you would like to know more information about the imported food quality and safety of China in recent years, please kindly refer to following clicks.

If you have any needs or questions, please feel free to contact us at service@cirs-group.com.