BREAKING NEWS: The Ban on the Cosmetic Anti-dandruff Agent Zinc Pyrithione (ZPT) in the EU will come into force on March 1, 2022

On November 3, 2021, the European Commission officially issued the Regulation (EU) 2021/1902 Regulation Bulletin, which revised the list of prohibited ingredients in Annex II of the European Cosmetics Regulations. The anti-dandruff agent Zinc Pyrithione (ZPT) was added due to its reproductive toxicity 1B of GHS classification. This means that the cosmetic anti-dandruff agent ZPT will be officially banned in EU cosmetics, and the ban will come into effect on March 1, 2022.

In Annex V of the current EU Cosmetics Regulation No. 1223/2009, Zinc Pyrithione (ZPT) is listed as an allowable cosmetic preservative. The upper limit of addition in rinse-off products is 1%. It is used, and the upper limit of addition in non-oral hygiene products is 0.5%. At the same time, it is listed as a restricted raw material for cosmetics in Annex III. When not used as a preservative, the limit is 0.1% for liven-on hair products. After the new regulations come into effect, ZPT will be removed from the EU list of permitted preservatives in cosmetics and the list of restricted substances in cosmetics.

Zinc pyrithione (ZPT) is a common anti-dandruff ingredient that has been used for more than 60 years. Many well-known brands of anti-dandruff shampoo products contain this ingredient, including Headshoulders and Clear, etc. Why are such widely used ingredients banned in the EU?

In order to protect the health of consumers, the EU prohibits the use of ingredients classified as carcinogenic, mutagenic or reproductive toxicity (CMR) in cosmetics, unless the European Scientific Committee on Consumer Safety (SCCS) evaluates that the ingredients are safe under certain conditions of use and the raw material is irreplaceable.

Zinc pyrithione (ZPT) has been registered under the EU REACH regulations. In 2018, the Risk Assessment Committee (RAC) of the European Chemicals Agency (ECHA) categorizing it as Reproductive Toxicity 1B after evaluation. The proposal was approved by the European Commission and starting its process of being banned under the EU cosmetics regulations. Although SCCS issued a safety conclusion on ZPT in March 2020 that shampoo containing less than 1% zinc pyrithione is safe for consumers, it cannot be proved that zinc pyrithione is an irreplaceable anti-dandruff ingredient, zinc pyrithione could not meet the exemption conditions for the use of CMR substances in cosmetics, and was eventually banned. 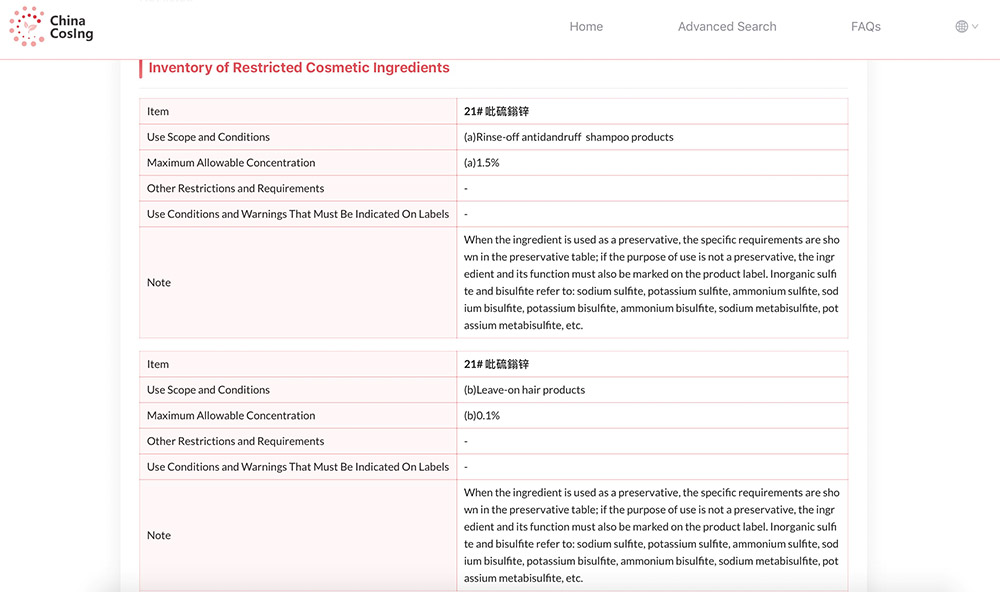